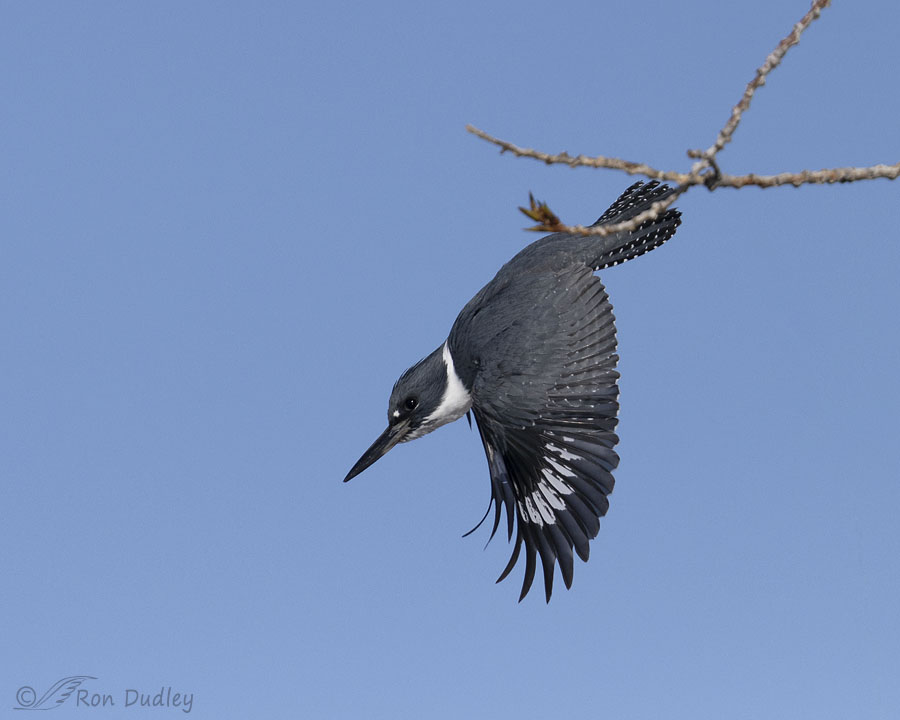 A recent unfortunate trend happened again yesterday. After five straight days of overcast that kept me from going shooting, we finally had a bright and sunny morning. But of course, I had two early morning medical appointments that prevented me from getting into the field.

After I got home all I could do to take advantage of the rare good light was make a quick trip to one of the several local ponds I frequent and hope to get lucky.

Thankfully, I found my old friend the male Belted Kingfisher fishing from his favorite perch over the pond. I caught him diving after a fish twice, before a woman and her two dogs, one of them unleashed, came along and scared him off. The first time he took off away from me but this time he launched in a direction that allowed me to get several shots I like.

Here he’d taken off from the nearly horizontal branch in the upper right corner of the frame.

Two shots in the burst later he’d nearly passed some additional branches below him and he was on his way. He missed the fish but it wasn’t for lack of trying.

But what we see here isn’t an accurate representation of what I saw through my viewfinder.

Some readers will likely recognize the fishing line and leaded split shot that was hanging down from one of those branches (I removed them in the previous version of the same photo). In a blog post about this same kingfisher nearly 6 weeks ago, Donald J. Kaleta pointed out that it’s fishing gear.

I’m becoming increasingly nervous about that stuff. When the kingfisher is at the pond he’s nearly always fishing from one of the two larger branches at the top of the first photo above so when he dives after a fish he often passes very close to the fishing line. How close he comes to it depends on his angle of dive and I’m fearful that one day he’ll become snagged in it.

So every time I visit the pond I do so with trepidation. I hate fishing line.

Tanagers Galore in Ecuador! | Outside My Window