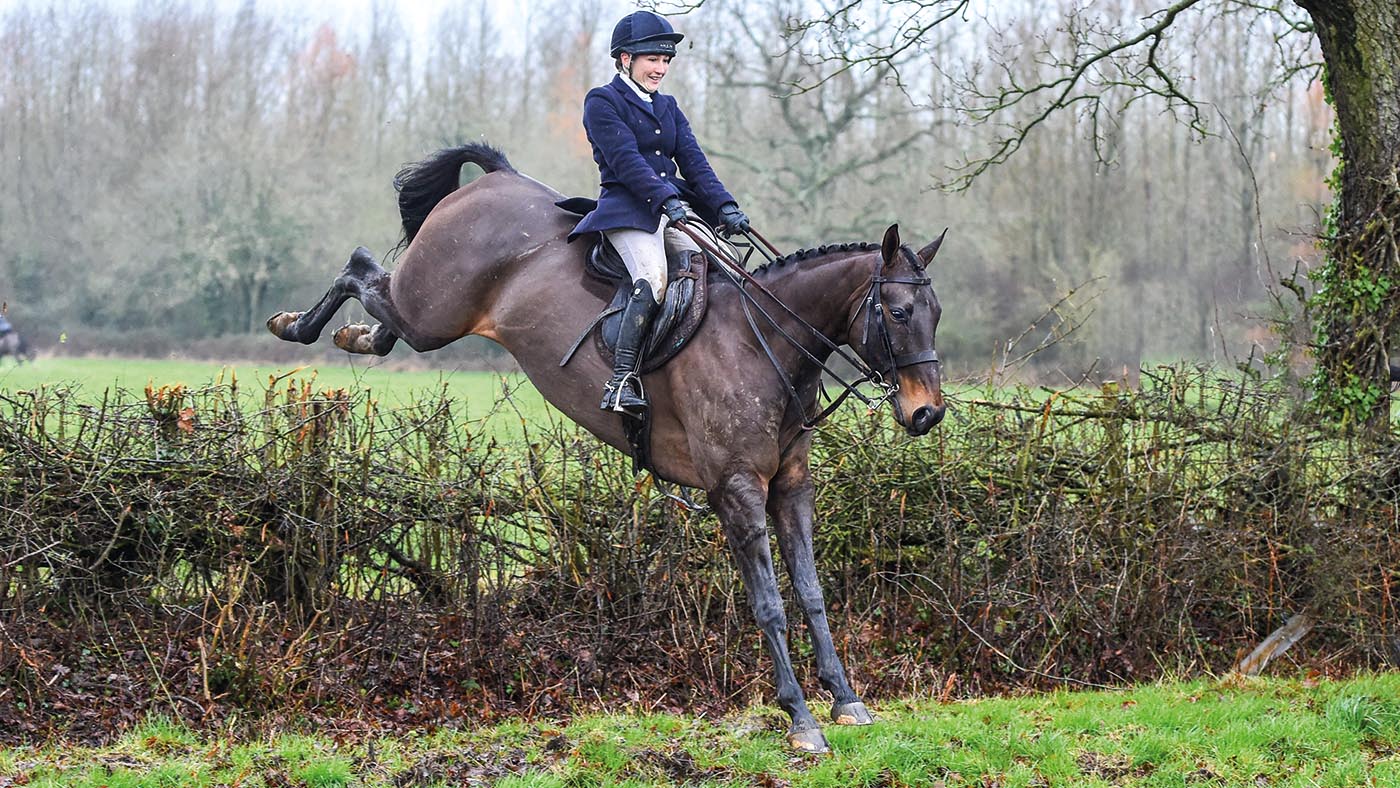 Laura Collett says a couple of months hunting has changed advanced eventer Moonlight Charmer from “a bit precious” to looking and feeling “a million dollars”.

And Moonlight Charmer has had plenty of success over his three seasons with British Olympic gold medallist Laura, including five wins in national classes, second in the CCI2*-L at Burgham in 2020 and third in the CCI3*-L at Houghton Horse Trials last year.

“But when we stepped him up to advanced, his tendency to be three strides behind you – a bit precious – showed up,” admits Laura.

In January, Laura borrowed Moonlight Charmer back for a day with the Beaufort for a Horse & Hound feature (27 January issue) and found him a changed horse – which was almost her undoing at the first fence of the day.

Laura writes in the feature: “[Beanie’s husband] Rupert Sturgis set off at a gallop with me just behind and to the forefront of my mind were his wife’s last words to me: ‘Don’t you dare take a pull,’ so I didn’t. But whereas a few months ago, when I saw a distance to a jump on Moonlight Charmer, I might have needed to press a bit to get there and there would have been a touch of a delay to his reaction, this time his response was so fast that I actually ‘got there’ too soon. Whoops!

“However, he felt very quick and clever; he’d snapped his front end up and got his back legs out of the way and landed galloping with his ears pricked, so in a funny way it gave me so much confidence for the rest of the day.”

Laura says that his time hunting has made Tommy “perkier and happier” than if he’d simply had a holiday in the field after the eventing season.

She adds: “I had wondered if he would run up a bit light now that he was really having to work – he’d always saved a lot for himself – but he looked a million dollars. He had flourished physically and his whole demeanour had changed. He was positive, forward and had the air that he was thinking, ‘What’s next?’ rather than, ‘Can I stay in bed?’”

We can’t wait to see what Moonlight Charmer can accomplish eventing in 2022 now that he has gained so much confidence in the hunting field… perhaps he’ll make an H&H cover with his eventing hat on as well as his hunting one?

Check out OBOS Quality 004, sire of last year’s Burghley winner MGH Grafton Street, and the other six stallions at

The event rider’s simple test improves coordination, collection and sharpness in horses of all types and ages

Horse & Hound magazine, out every Thursday, is packed with all the latest news and reports, as well as interviews, specials, nostalgia, vet and training advice. Find how you can enjoy the magazine delivered to your door every week, plus options to upgrade your subscription to access our online service that brings you breaking news and reports as well as other benefits.

Saturday Video: Testing Equestrian Life Hacks – So You Don’t Have To! | Eventing Nation

Op-Ed: The AQHA Wants To Do What?