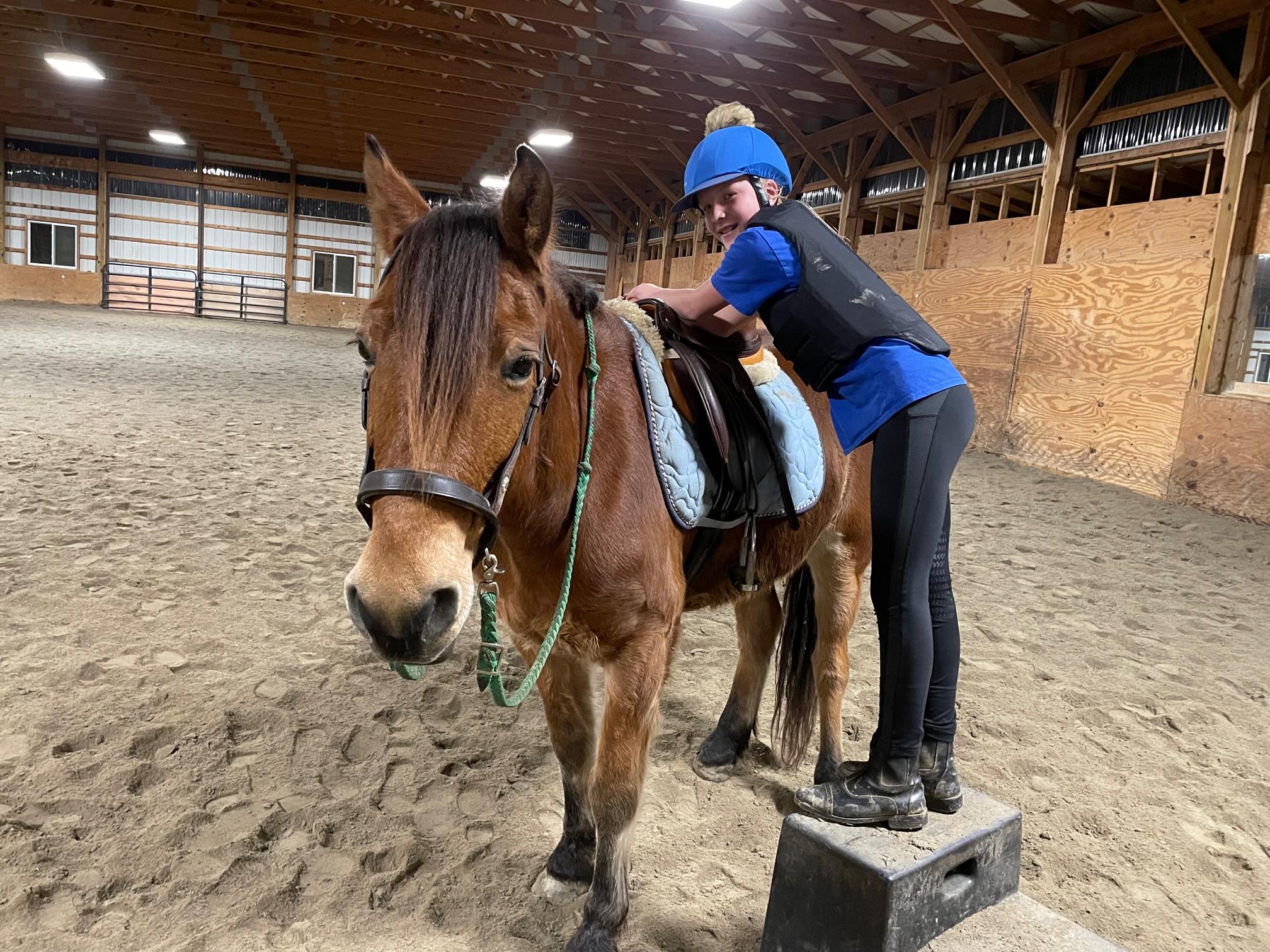 Meet Koda, a not quite 14 hand high shaggy little Mustang with a BIG personality. This first of three articles introduces us to the lovable guy as we get ready to follow him and Ashley on their training journey.

Ashley here! Long time no see, dear readers. For the past year, I’ve been a bit quiet on the writing front because I have been doing a lot of riding of my own horses, and teaching a lot of riding students at the lovely Johnna Stables, a Quarter Horse farm in Carlisle. If you’re wondering how a western dressage rider who specializes in off-track horses (both Thoroughbreds and Standardbreds) ended up working at a Quarter Horse farm, I’m honestly still not sure. But I think it has to do with very open-minded employers (I say this in my head in the same voice that Bing Crosby says, “very brave parents,” when asked how Freckle-Faced-Hanes-The-Dog-Faced-Boy had the nerve to have sisters in the seminole holiday classic White Christmas).

For the past month, my life has been even a bit more hectic because I’ve welcomed to Johnna Stables a five-year-old Mustang named Koda. So, now, not only is there a racehorse-lover teaching riding lessons at the Quarter Horse show barn, but also in she walks with a shaggy little 14-hand Mustang. All the show horses are like, WHAT???? (insert raised head, Heartland-style whinnying, and white-eyed-side-eye here). He also walks with swagger, and who doesn’t like a little guy with a big personality!? But, honestly, Koda’s hard not to love because he has a presence, an intelligence, and a versatility that allow him to fit chameleon-like into any scenario, and help him to win friends and fans wherever he goes. 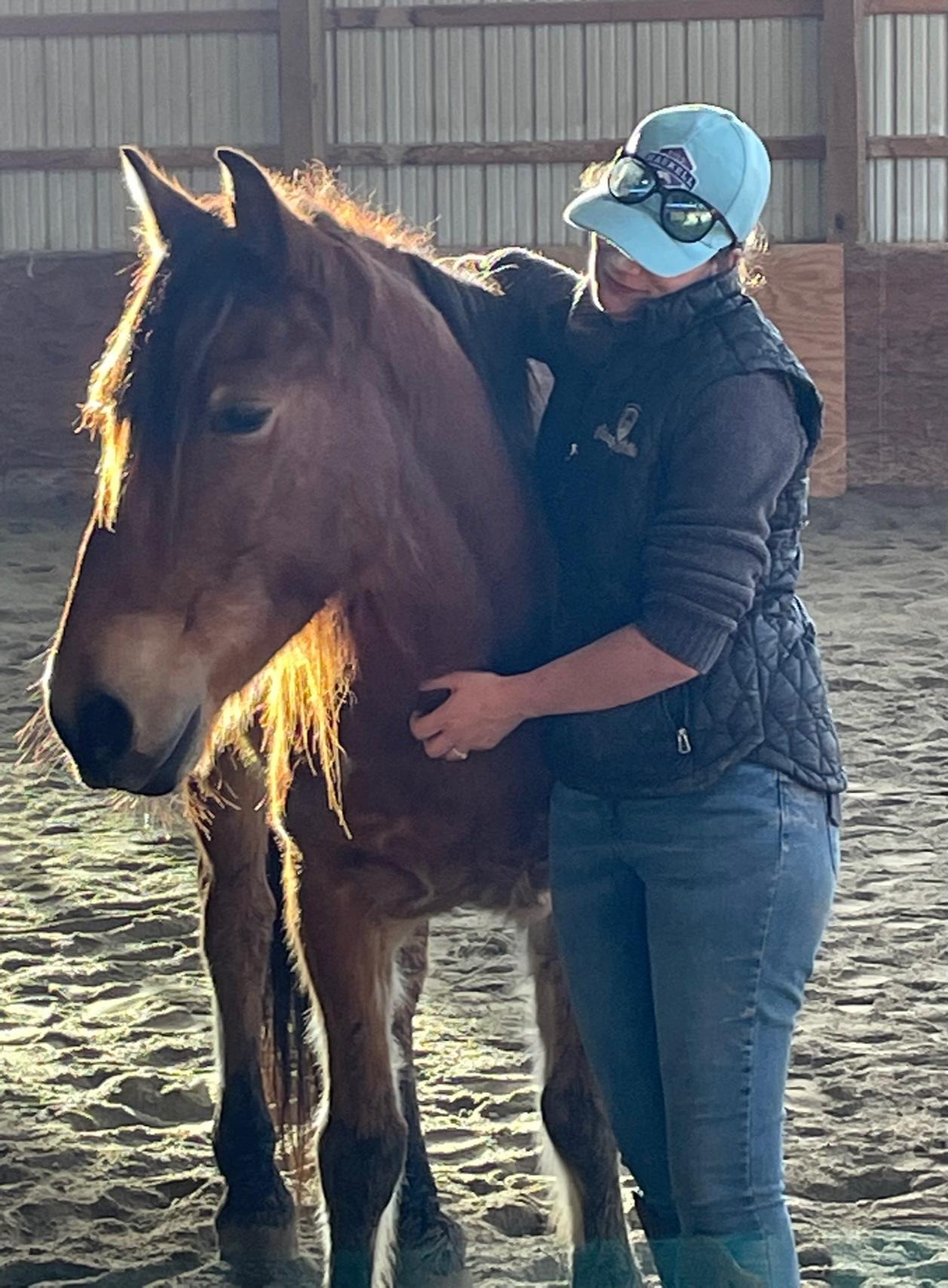 For example, when he arrived at Johnna Stables at the end of November, he had only lived outside. Yet he took to life at a busy show barn, where he was often stalled, like a duck to water. He had never had his feet handled and had only learned basic handling skills. He had come to Johnna Stables for the purpose of training for a competition, Rescued to Stardom, which will be held in March in Harrisburg, PA, as part of the Horse World Expo.

If you are unfamiliar with Rescued to Stardom, it’s a competition between horse rescues. Each rescue must apply to compete. Then the rescue can choose a horse and a trainer to compete. Safe Haven Equine Warriors (SHEW) acquired Koda when he and another horse were surrendered by their owner. Tina Snyder, who runs SHEW, and I met last year at a Double C Farm trail challenge. I loved watching Tina work with her group of students and rescue ponies. And she liked watching my young Thoroughbred and Standardbred navigate the course. So, when Tina called to interview me to see if I might be a fit for Koda, I was thrilled at the chance to compete in Rescued to Stardom and at the chance to work with a Mustang again. 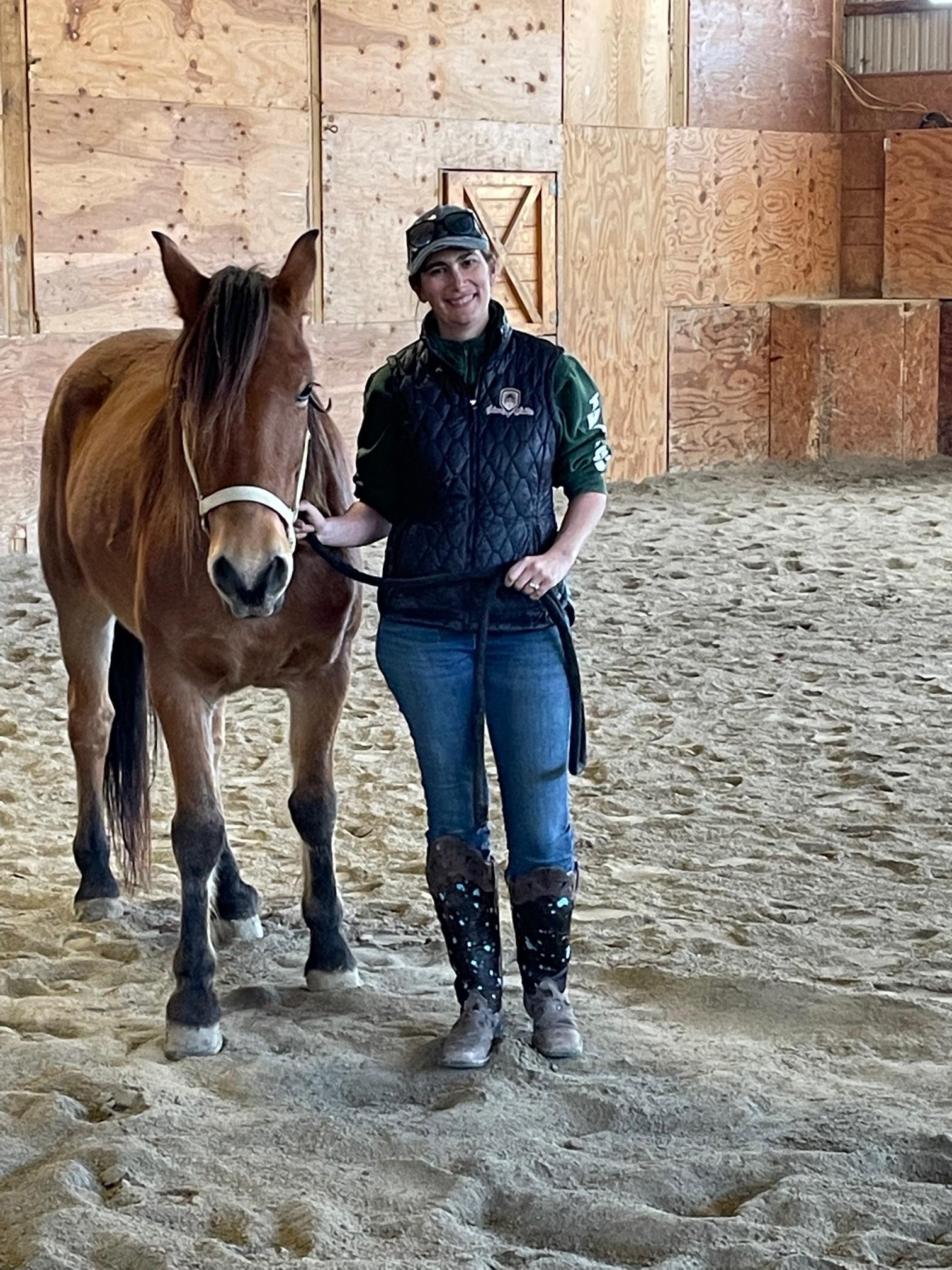 In my youth I trained a couple of Mustangs, and I’ve always enjoyed working with horses who haven’t been domesticated. My game plan for the first 30 days of the competition (which have just passed) was to focus on our ground work, because a ground work demonstration is part of the competition and is worth half of the total points. So for the past month, Koda and I have worked on basic skills like picking up his feet, tacking up, mounting, loading on different types of trailers, and light riding. But we’ve mainly focused on ground work. We’ve been working on ground tying, lunging, long lining, ground driving and liberty work. 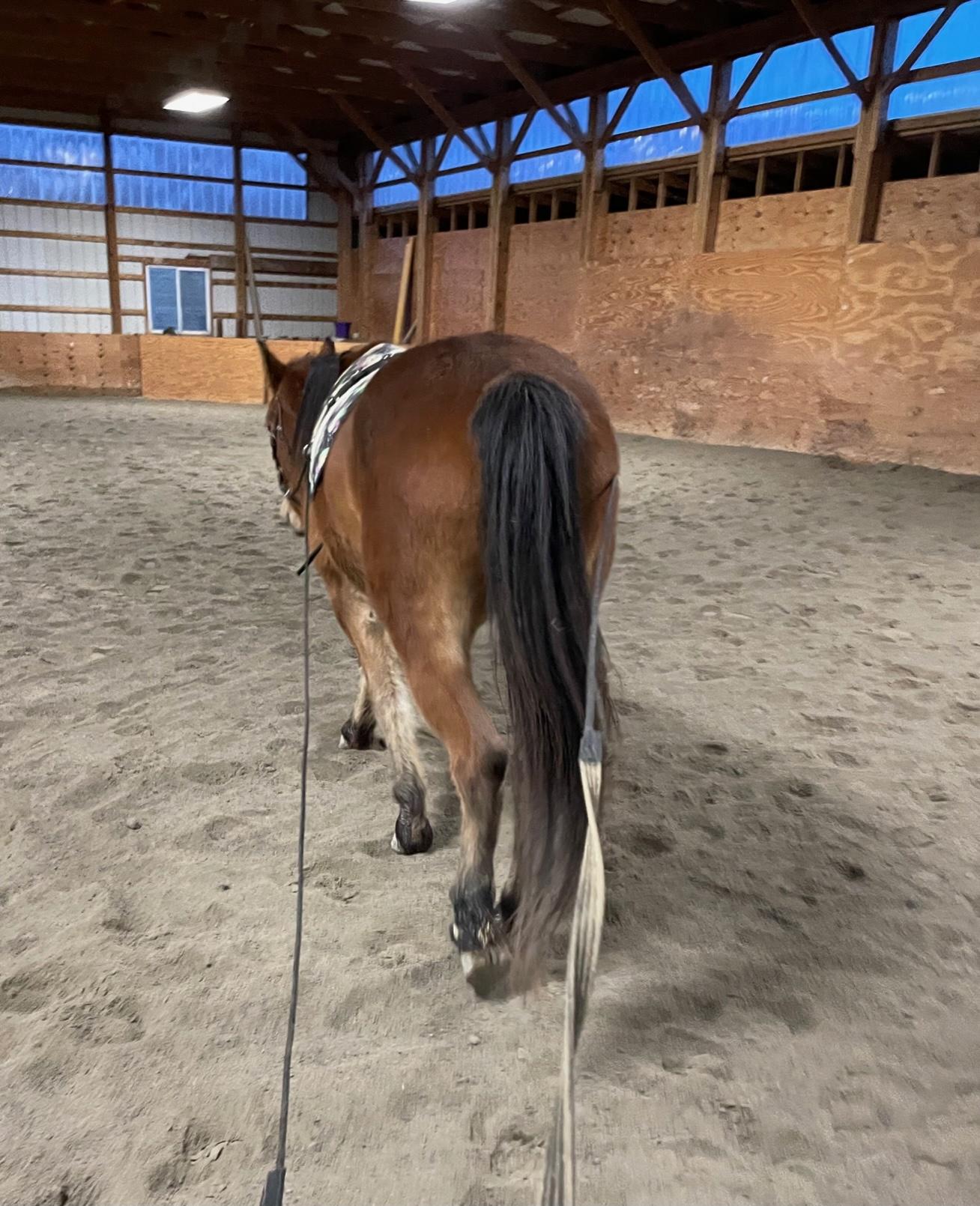 Koda soaks up new things. He’s very good at standing back and watching and learning. He observes constantly, and it takes him a minute to be confident with new handlers, a thing he’s getting a lot of practice with at a busy show barn. I’ve found he thrives on varied repetition. He likes repetition because he builds his confidence by being able to predict what is coming next. That positive anticipation (said with a pause like Dr. Frankenfurter from Rocky Horror, of course — antici . . . pation) allows him to feel safe with his handler. But because he’s extremely intelligent, he also gets bored easily, so I like to scaffold things by increasing the difficulty slightly, then taking a step back to easier things, then stepping back to a question that is more challenging.

For example, when I teach liberty maneuvers to Koda, I teach them on a long, loose lead rope first. Once he starts to master them on the line, I take off the line and we practice them without it. Then it goes back on to help him be sure he’s getting the right answer. Then I remove it again, all while increasing the difficulty. It’s like spirals of work. We constantly come back to and revisit the same thing while increasing difficulty in ways that are very black and white. Koda always needs to know he got the answer right. He thrives on that.

Koda’s been tacked up English and Western and seems to enjoy both sets of tack. He also enjoys going for a ground drive in his surcingle. He likes when the show horses jump around in the arena. 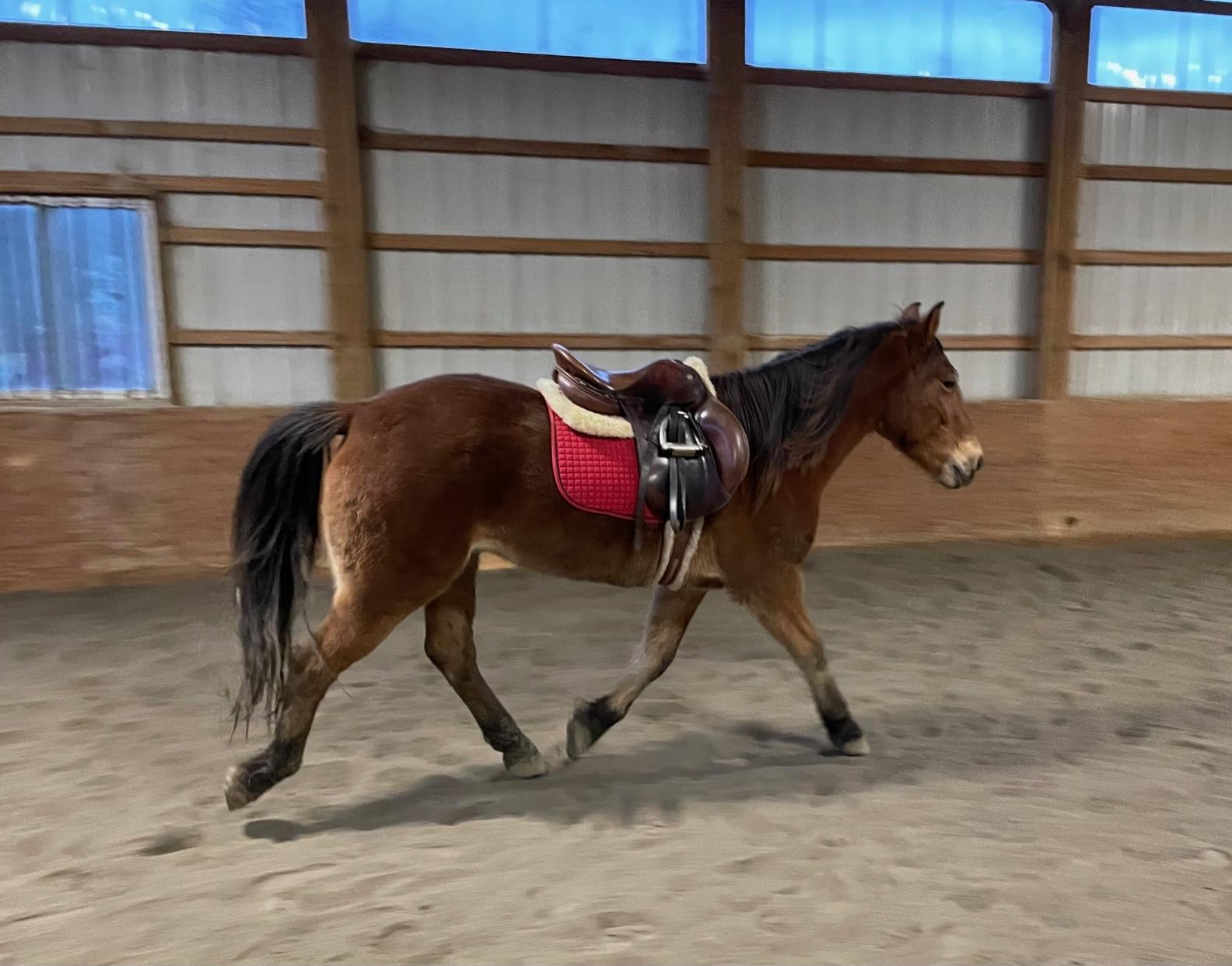 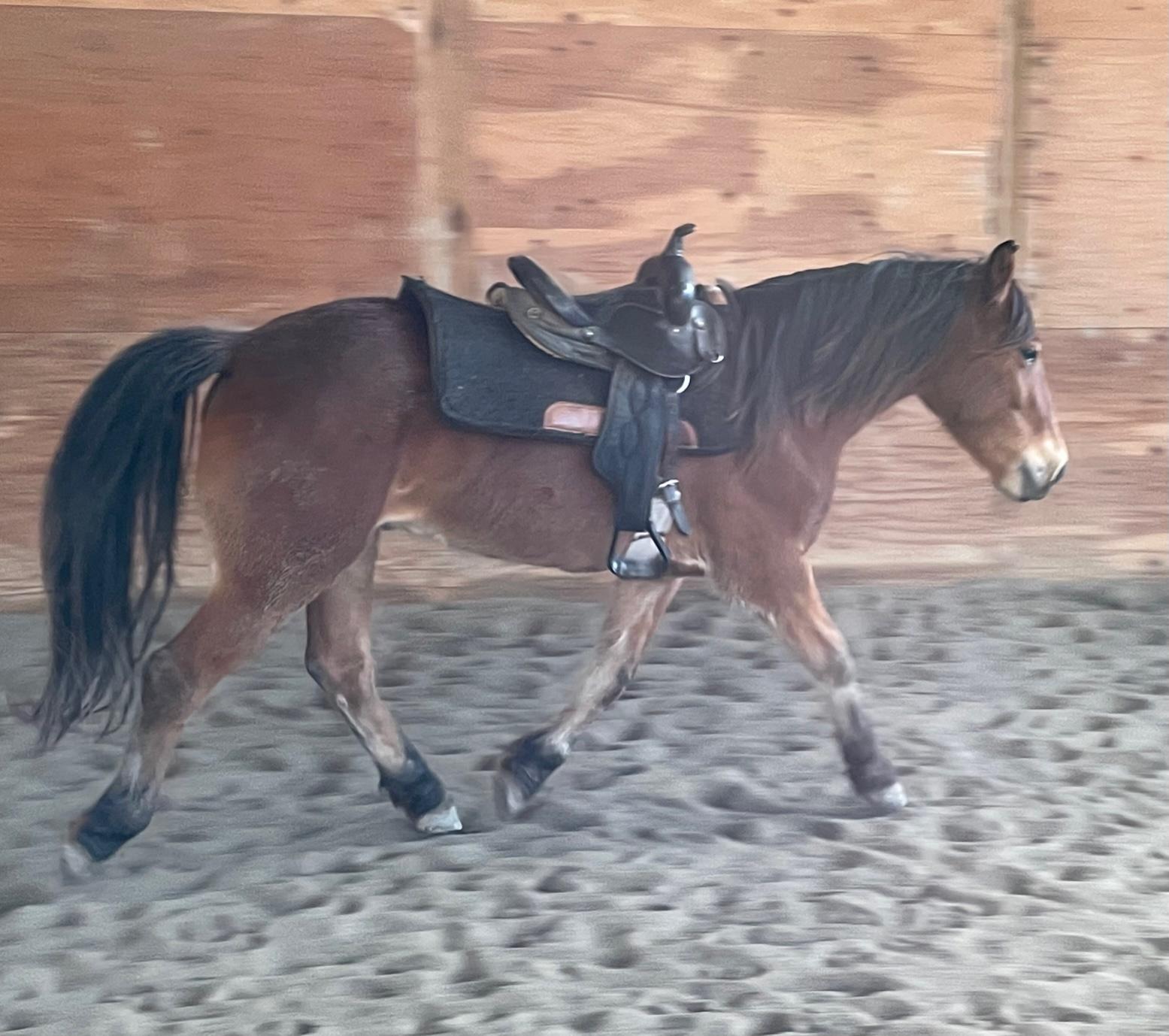 The other day, while round penning, he showed off some mean flying lead changes. And not too long ago, he herded a baby QH, Liv, around the round pen, in a way that made me think he’d be handy in a pen with some cows. Koda has also been doing groundwork lessons with my students, and has proven to be a kind and patient teacher. 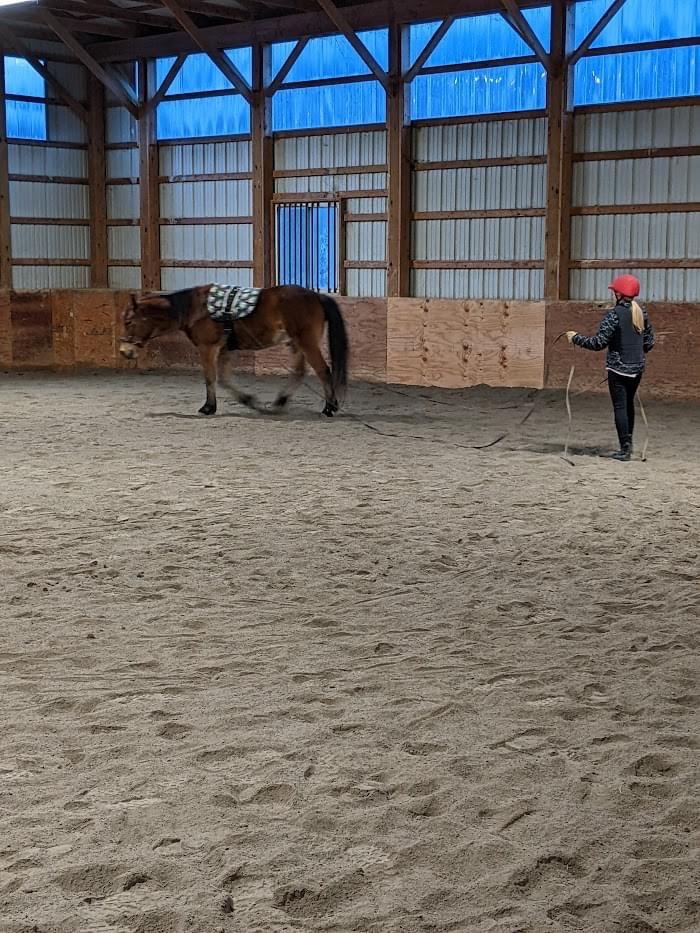 Over the next 30 days, I’m excited to ramp up his riding skills and to start working on tying with him, which is a life skill we haven’t devoted much time to yet. I’ve also been working on getting Koda confident with a rope, which has been the hardest thing to get him acclimated to so far. Another challenge has been the sound of rowels. We have a lot of trainers and instructors at Johnna Stables, and many of them wear rowels. Koda is not a fan of the sound of the clinking. Weirdly, he’s fine with them when they are on me,  but he reacts when confronted with them by someone else, especially if they are on his right side, which is his weaker side. He’s also still not good at having his feet picked up by people other than me, so that’s another spot that we need to keep working on.

I’ve read that feral horses especially tend to bond rather intensely to one person, and this is a thing that SHEW and I are trying to avoid with Koda, because we want him to be able to be handled by a variety of people in a variety of different situations. So, Koda and I are always looking for places where he is only okay with me, and then we find those weak spots and work at them until he is equally good with other people in those areas. It helps that I have a lot of hands at our facility to help acclimate him to new things. SHEW and I both want to set up Koda for the best chances of success in the future, not just have him work well for me in the short term. I feel blessed that Tina and I are so much on the same page about that. 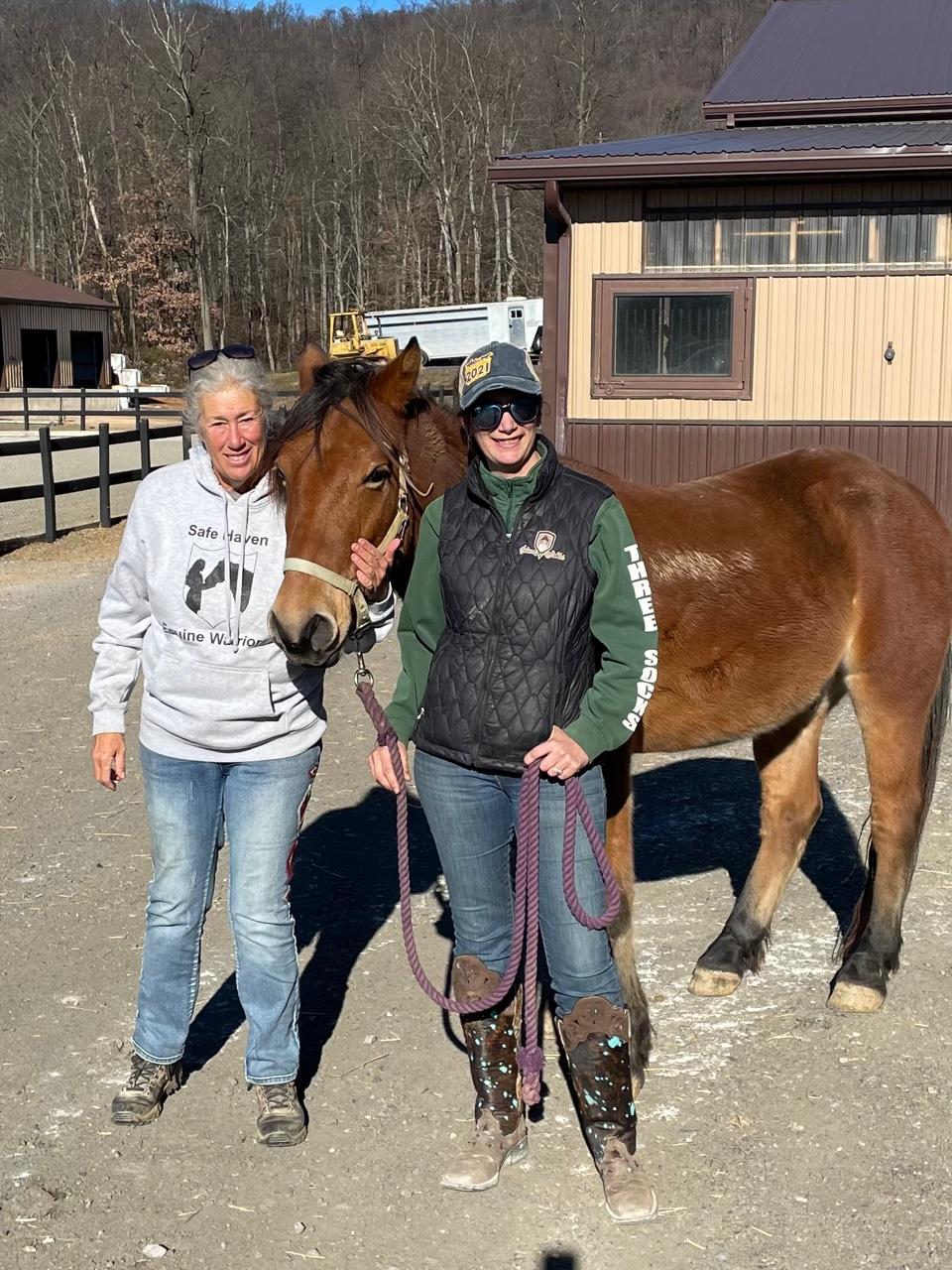 When it comes to a training competition, especially one with a short time frame like Rescued to Stardom, it can get easy to focus on short term goals rather than the big picture. And it can get super easy to get competitive and to lose sight of what is important in the long haul because of the desire to win. It’s so tempting to watch other people’s progress and to compare your own progress to them. But, as someone who’s done a lot of training competitions over the years, I’ve found that it’s important to stay in your own lane. Focus on your own progress. Don’t waste time or energy comparing yourself to other people, because when it comes down to it, it’s you and your horse in the arena, and as long as you’ve prepared that horse as well as you possibly can, you’ve won!

Stay tuned next month for another update from Koda and me! I’m excited to see where the next 30 days take us. And if you have any questions for me about the training progress with Koda, drop them in Facebook comments!

An Immunomodulator Can Help Mares With Persistent Endometrial Cups – The Horse

So You Think You Can … Be An Equine Photographer?

‘All you need is love’: Household Cavalry to wow German equestrian fans at Aachen CHIO